It is becoming very clear

It is becoming very clear

In a time when there is a great divide not only within the USA but worldwide, there is an ever increasing demand for transparency. This demand is not only in news reporting, social media, politics and in the work place but has translated into this season hottest fashion trend …TRANSPARENCY and the understanding of the smallest details as in the emergence of the mini bag. This movement towards transparency often calls for the use of plastic, a product that is synonymous with providing the viewer insight into your world.

From Milan, to Paris, To London and onto New York this trend is fast appearing not only on the runways but in the streets of metropolitan cities both large and small.  Just when you thought it was safe to bring out that “old bag” one is reminded that this is not the trend of the past but a trend that shows the true meaning of “It’s In The Bag”.  With this movement towards, the oh so cute mini bag, comes the dilemma faced by all woman, the need to carry not only a lipstick. Where does a woman now carry everything but the kitchen sink and yet still have the ability to function in the real world.  As we all know necessity is the mother of invention and from this need, comes the appearance, of a bag within a bag .The placing of the mini bag inside the mama bag now gave one fashion and function while concealing intimidate contents from prying eyes . This fast evolving trend and duality of the bag within a bag afforded the option of seamlessly moving from day into night dressing and leaving the larger bag behind.

As both a designer and a merchandiser I have always been able to predict a trend and am known for being at least two years ahead of fashion hitting the runways and becoming diluted down to the consumer. I had for years been carrying a bag within a bag and saw it as my way of form following function, following fashion and necessity being the mother of invention.

Before I turned to designing jewelry I was known for designing bags and was ahead of the curve in my use of PVC instead of leather.  I saw this as a nod to protecting animals and an awareness of the growing trend toward ecofriendly materials. While developing my website, focusing primarily on my world renowned jewelry brand, I felt the tug to return to my roots of not only a designer but as a buyer, a career I had successfully had with many top end retailers in UK, USA and South Africa.

The opportunity to fulfill this desire arose organically on a recent trip to Cabo Mexico where I was doing an in store personal appearance for my Gillian Julius jewelry brand. Through the boutique buyer at this luxury resort I was introduced to a bag designer and manufacturer based in Mexico and employing and educating the local Mayan artisans.

Her style and sensibility really resonated but I was looking for a material that was less artisanal and more futuristic and was fortunate enough to come across her use of raffia, a material that would allow me to address the trend of transparency without the use of the prerequisite plastic.

With the addition of metallic colors for both the Mescapel straps and Pom Poms I was able to design a bag that was both fashion forward and functional as well as being light weight enough to fold and pack for those adventures to far off lands or just day to day city living. The use of these metallic colors addressed and merchandised well with the colors of my jewelry collection and enabled me to add bags to my ever growing website Gillian Julius. 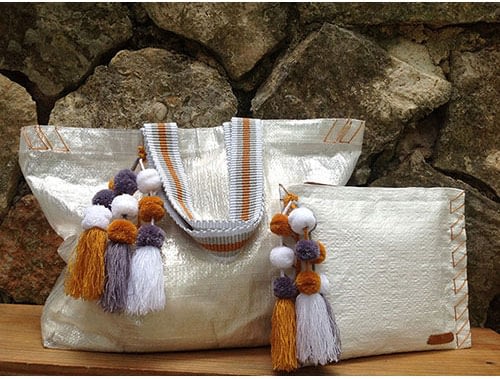 I also wished to address the need for a bag within a bag as this large tote was not only see through but easily accessible , a concern for most woman whether carrying The Louis Vuitton Never Full or the must have Goyard tote.

With the additional design of a standalone opaque white lined pouch that fitted easily into the large transparent raffia tote the issue of security was addressed in a fashionable way and the pouch content hidden from the world . An on trend solution to an intimate need in an ever-changing world I’m convinced transparency is key even if it is just a quick glimpse inside your world.

About the Author: Gillian